The things you find...

While looking for some beads in an old tackle box Dave bought me when I first began tatting 5 years ago and found all my goodies from way back lol
I really liked to shuttle tat back then but favor the needle more now I dont know why. Probably because its what I taught myself with and feel more confident and comfortable with it.
Maybe since I found all this I should begin with the shuttle again.
I was trying out polymer clay at the time and I made these "georgous" HA HA beauties hey it was just an attempt but they all work good :) they arent pretty though LOL 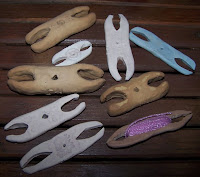 He made me these BIG tatting needles which work nicely when tatting yarn one is missing because its on a project at the moment. the others are 2 cro-tatting and 1 crochet hook all made from dowels too Its weird that I found them tonight 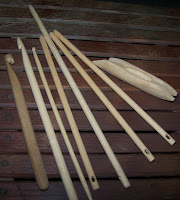 as for other shuttles I did have 4 clovers but 1 went missing I have one of those with the bobbin but really dont like it much ohhhhh and this one was my dads idea when I first started tatting he said for me to try this with a bobbin and it worked its some sort of gadget for tying flys for fishing. 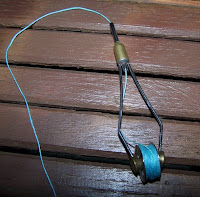 thoughtfully written by Heather at 7:22 PM

Wow, you are very resourceful!