Snow, what can I say we got 26" Saturday along with the past 2 days another 15" and ITS STILL SNOWING. I like snow but c'mon this is a bit rediculous. Got some neat photos though, the kids were off school the past 2 days, hubby is off today all due to weather. They have barely plowed our roads here so I can imagine they will be impassable for awhile. 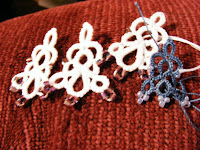 Frustration- remember my tatting tea tuesday possible new design thingy do. WELL I have been trying and trying and yes TRYING with fail to make it work properly, see I am using the shuttle but trying to make it as simple as can be. I am just putting it aside for today. Maybe then I will have that a-ha moment tomorrow or another day. There are my failed attempts with the last one being the most dissapointing I decided to use size 20 or 30 thread not exactly sure which it was, i got to the last ring and the thread pulled and it looked like poo. Grrrr that was last night I put it down and went to bed so dissappointed in myself.
ADHD- My son, grrrrrrr!! I will not go in to too much detail because I just dont want to, but I spent about an hour and a half on Tuesday night questioning him on some 'things' I heard from a teacher that he done, All I got were lies, lies and more lies I was soooooooo frustrated and angry, so finally after that hour and a half he started telling the truth, he is on punishment for a long time, also discovered yesterday that he has been stealing food again, he of course spent about an hour this time lying to me, more punishment has been added, i made him shovel some snow yesterday (it was light and fluffy snow so not that big a deal) today he did a little bit, and is helping do quite a few things here too. I dont sleep really well due to some of his out bursts, especially when he hurts himself (not badly) but still, His helpers told him as David and I have if he keeps up the hurting himself and things like that he could be taken out of the home and placed in a different kind of home and only be allowed here certain times. That would kill me, despite all of the crap that boy puts me through I would just be broken without my son here. I have been tatting but at the moment I am keeping it under wraps but I may cave and show it soon though I am not good at secrets LOL
So I am a mess, the weather is a mess, my house is a mess. JUST A MESS EVERYWHERE lol
I vented now I am done time to get the monsters some lunch and hopefully I can tat a little between laundry and other stuff.
thoughtfully written by Heather at 11:40 AM

Hang in there. I have a pretty good idea what you're going through, as I have a kid who does some some pretty awful things himself. It's making me crazy.

Email me privately on this...

And even Hotlana may get some more snow!

Keep plugging on with the design Heather. I think it will be worth it.

I'm praying for your son. Just be strong for him, he needs you! You are a good Mom. Don't forget that!! BIG HUG!

This too shall pass.
Spring will be here before we know it. Remember to live life, enjoy and make the BEST of it...
live in the moment....for this will soon be just a memory! Make it a GOOD ONE!