Its been a wild week here I will say that much. Monday David was off work and Nate didn't have camp. It was hot, miserably hot, the day went to crap nothing went right, Whatever.
Tuesday we went to Debbie's for out Tat and Chat had a good time like always. :)
Got home to a fabulous email from Deb at the Keystone Tatting Guild, I had contacted them to see if they would like me to donate my tatted books for their library, I forgot I sent that email. She asked if I would like to deliver the books in person and teach a 2 hour work shop with one of my tatting designs, I was excited and sooooooo happy, its in Camp Hill, Pa close to Harrisburg. Approx 3 hour drive, i though no problem I can do it. I sent Debbie a text and told her you are coming with me and she agreed its not until September 11. I told David when he got home and that was my first mistake. He made me feel like I was being stupid for being so excited and that it "wasn't that big a deal" well to me it WAS. Pretty much he was telling me that I wasn't going :( ok whatever, then he tells me in his crappy tone of voice "if you want to go then go" he knows that if he says it that way I will feel bad and not go. My happy excitement lasted a few hours I guess.
Yesterday was miserably hot my kitchen reached 87*F And I was cooking, I cant stand the heat, plus I was feeling really weird because David and I both take Zoloft we share our pills we were down to a few so I decided to be NICE and not take them until we get paid and can get mine filled thinking that was the nice thing to do, I am going through withdrawals from it, weakness, dizziness, faintness, and horrid mood swings. He is getting mad at me about it, I just want to scream right now.
He also pretty much told me that he doesn't really care about my business because it upsets him that he cant have his own business, so when I go on about things or want to do things that I enjoy he doesn't like it, WOW so I guess I gotta learn to keep my mouth shut. Cant ya tell my nut pills have exited my system. Yikes I do sound rotten don't I?

Then yesterday (Wednesday) my daughter was outside checking on Brucie and giving him treats and she came in the house nearly crying she got stung by some of those nasty bees in the lip, we iced it a bit and put the baking soda on it and her lip was huge within about 10 minutes I got scared because David is allergic to bees she was breathing fine and everything but it just kept getting bigger it looked like it was going to burst I felt horrible so I made the decision to take her to the ER I was worried. She is allergic next time it could be worse they said :( She is on Benadryl, Pretnisone, Prevacid and we need an Epi-Pen for her just in case she gets stung again, they said she could still have another reaction today its unlikely but it could happen. It took so long for the swelling to start going down we were at the hospital for a couple of hours last night. Finally after the kids went to bed David told me I over-reacted a bit that he sees that all the time when he gets stung. hmmmmmm a 45 year old man compared to an 11 year old child I think there is a bit of a difference there. Big deal I may have over reacted but better safe than sorry. This photo was taken about an hour after the meds were given the swelling was already going down slowly but it was bigger than that.
Nate was worried about his sister yesterday but today he was mean this morning WOW.
Nate made me this at camp on Tuesday isn't it so cute 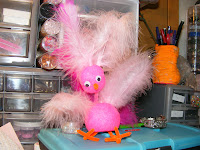 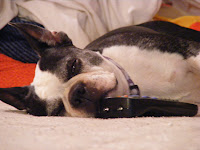 And Ginger says this heat is not something I like 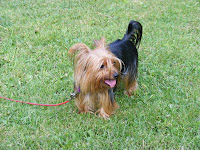 I am done being mean for now, I guess. I am working on designs for Tatted Earrings and Things book 2. Once I get things straight I may be needing some test tatters, or tatting testers, how ever you want to put it.
Time to go and tat and try to relax some, I hope for a very un-eventful day. So far so good, with the exception of Nates attitude this morning. thoughtfully written by Heather at 10:53 AM

You are not being nice by leaving the meds for your husband- you're just making the whole family miserable because they have to deal with you feeling miserable and because you feel really miserable. I also take Zoloft and ended up with an extra months supply when my son decided to quit taking his. I wish I could help you out by sending it to you but that's actually illegal. So I can only say that I'd love to be a test tatter- I can be contacted through a private message on InTatters.

I don't think he should be angry at you for doing what makes your happy...that's just childish

Prayers for a much better and peaceful relaxing weekend for you and your family! :)
I love the wonderful pink bird! It is so cheery looking! :)

You should go and not feel guilty over it at all. You have every right to be excited about it and do NOT let him ruin that for you. AND, you did not over-react about the bee sting. It's much better to be safe than sorry, especially where your children are concerned. That is my opinion anyway.

Wow, you have had it hard this past week. Please, please tell me that you WILL go to Camp Hill, PA with Deb and enjoy your tatting (teaching!) time there!

Don't give in to the guilt trip. It is a marvelous opportunity that you have earned through all your time and effort. You deserve it.

OK, I will stop butting my nose into your business now...

Oh, Heather sorry to hear of your less than perfect day, hang on in there. It can only get better!!! If you need a test tatter, I am willing, to give it a go. I love a challenge!!

Naw... I do not think yo over-reacted.. My DIL had a reaction to something - we never did find out what - and her lips and face swelled up so that it looked like everything would burst... SCARY! We called her Smurfette for 5 days!
♥ Fox : )

Ai yi yi! Glad to hear that the swelling went down and that she's okay!!! Made me wonder, though... I was stung twice and the last time was on my butt --Could that be why it's been swollen for these last few years? ;-) (Did I at least get you to crack a smile?). The sting is a true story, though. LOL.

Hope you start smilin' again! I'm in a mood to be mean enough for me and about five other people, so I can always take over the duties in that department... ;-)

Okay, enough of my rambling. Time for me to try and find something to tat or get myself frustrated trying to just tat string and hope it turns into something pretty. Hmm... tatting sans pattern. Haven't done that in a few weeks...

Hope you're feeling better soon! And, by the way, I'm so happy for you and YOU should be excited. Tell the hubby that your happy for some other reason, heck, tell him you lost a pound and that's why your happy... But don't let him take away your smiles and excitement! We're all here to share it with you wether he knows what it's about or not! (Wow... Was that bad advice? Hmmm....).

No you were not over reacting to any of it.
Allergic reactions need fast reactions.