well there has been so much going on lately. Too Much!
I have in fact been crafting somewhat, not much tatting but I am slowly getting back into everything. This whole year of 2011 has been a rough year on my entire family. We had some "unnecessary" troubles caused by a 3rd party which nearly destroyed the relationship between my parents, brother, sister and I. The miscarriages, yes plural, i ended up having another in may. i am still not over that, at times I think no one cares about it, but how could they possibly understand unless they went through it. My mom had breast cancer, she ended up having a double mastectomy in September, she is recovering fine, i can not imagine what it is like for her.

I am going to be an aunt either at the end of this month or beginning of next, I am super excited :)

I lost one of my fur children on September 12. He hung on for 5 days, I was with him those days and I am so glad I was, I will tell you all this story, already I am tearing up. i was sitting with him, singing "you are my sunshine" it seemed to make him relax a bit and me as well, There was this butterfly, an orange and black one, it came around one day and just hung out, being silly I thought i would just put my hand out and see if it would land on me, and it did. It crawled up my arm and on to my shoulder where it sat for a long time, i moved and it went into my hair then back on the ground. My brucie was restless then and it went and landed on his paw, I was so touched later that day I went and did some research about butterflies and they are believed to be the spirits of loved ones, i firmly believe it was my other dog Frisky who had died 3 years ago they were best buddies. That butterfly hung around and did those things until Brucie passed away, i have never seen it again. Hubby buried my baby and made him a nice wooden cross and the kids and i put some fake flowers there for him. I miss that little stinker so much. We all do, even though hubby acts like a hard a$$ at times Brucies death really got him. 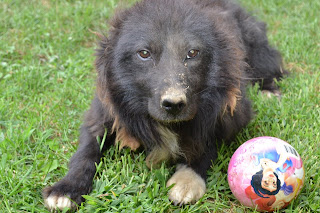 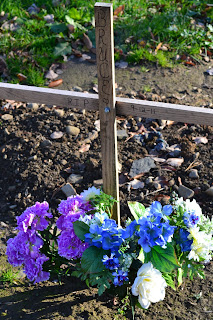 I will update more once i get my photos of my latest creations on here and edited. :)


thoughtfully written by Heather at 9:58 AM

its good to see you blogging again, sounds like its been super rough for you, i hope things turn more for the better!

I thought I was having a bad year, I am so sorry to hear about your year, I still put flowers where my dog is buried and she died nine years ago.

Sorry to hear that this year has been so rough for you. I can't wait to see pictures of what you've been working on!