Ohhh Mi Gosh!!! I hadent realized it was 21 days til Ho Ho arrives!!! Zoinks!!
I will complain first I have had one of those weeks where each day had its share of hmmmm shall we say misfortune well with the exception of Tuesday I spent the day with my mom shopping and we ate out as well it was wonderful. I figured today was going to be better since I didnt have to go ANYWHERE my rear was going to stay firmly planted to my chair (yea right) anyways I woke in pain on my left side because some moron (me me me!!) slept on the left side last night and she knows she cant do that LOL my ribs hurt badly and that side of my back. I teased David and told him he must have been mad at me in his sleep hee hee!! I was so tired this morning too I had so much trouble functioning it wasnt even funny. My son was being well the blessed ADHD angel that he is some days... My daughter woke up grumpy because she had tutoring this morning and had to be up an hour earlier than usual. So after 2 rides to the bus stop and finally some peace and quiet I decided to just get busy and avoid the slight urge to curl up in my chair and take a nap... I cleaned a bit and added a few more things to my etsy shop (there are some new shuttles there too)
I decided to sit down and tat when I was fully awake I finished up a snowflake its the Minaret by Vida Sunderman in the book TATTED SNOWFLAKES.
I have a secret santa package to get out as well as 3 other partners in a Christmas swap :( I am behind AGAIN!!!! I have my moms Christmas gifts to tat. I got her birthday present well part of it in the mail today I am not saying what it is because she peeks at my blog quite often ;) I decided to do another snowflake for one of my exchanges and I must be in a crap mood because it didnt work so I went to rip it off my needle and it decided it didnt want me to do this and SOMEHOW i stabbed my tiny tatting needle into my thumb about 1/4" and not the pointed end the end with the eye LOL (DARN RED HEADED SHORT TEMPER) Then I had another idea for a different snowflake it was turning out nice until I joined the 1st round and the long picots I had in the center were TOO LONG and it looked bad ohhh well I cut it off and layed it aside for future doing...
Then I get a phone call more troubles with the bank I put hubbys check in yesterday to pay bills well someone took out a payment and they werent supposed to they refuse to reverse it so we are left with a whopping $8 to pay bills and stuff good thing I had 2 sales on etsy today now I actually have gas money for my car. I took some of the money yesterday and finished up christmas shopping now I wish I wouldnt have but its done. It just sucks all these little things keep adding up lately Grrr! Anyways I was on the verge of tears sitting in my chair Ned comes to sit with me he curled up in my lap and fell asleep and before I knew it I was ready to doze off I think I did a little but after that the mail man came to the door with my packages I am so glad we got the part for our furnace (ohh yea that crapped out the other day too Dave has been able to keep it going but having to mess with it once a day to keep it on) I started a new design that I hope to have ready to show by tomorrow. This morning I finished up a luceted bracelet for Shannnan I will show that later on because its on the camera and its in my bedroom and I am too lazy to go and get it right now lol
Here is what I tatted recently
the snowflake and my Split Ring Angel 2
I had designed this in January of 2003 when I first learned the split ring
Lets just say the pattern needed some re-working I will put up the pattern when I have more time The original can be found on my pattern site http://www.freewebs.com/heathersdesigns2003/ if you do try it be fore warned there are mistakes and in my original pattern each row was cut tie. The new one I did you only have 3 ends to hide The head, wings, and dress 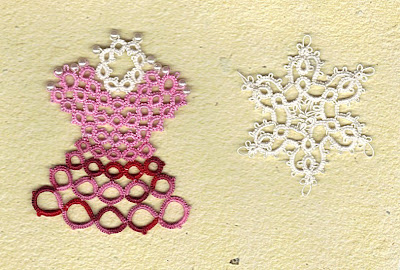 Ok done griping for now I needed to get that off my chest
thoughtfully written by Heather at 2:01 PM