A week of learning

Wednesday I taught myself the SCMR

Last night thanks to Janes tutorial
I learned BLOCK TATTING

I was feared of the block tatting because I thought it was really hard Psssh, I am a dork it wasnt bad at all I am gaining more and more confidence as I ease into the shuttle again. I think its Janes little bit of picking on me which I love and her "no pressure" attitude about teaching me things and her WONDEROUS generosity.

Now maybe I can FINALLY work on Marth Ess' book Tatted animals on the block that I bought from he when she first released it... LOL 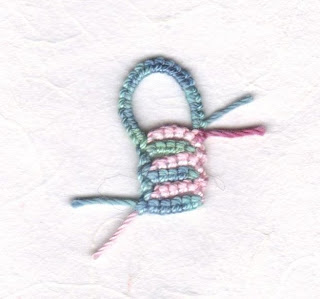 thoughtfully written by Heather at 7:00 AM

Block tatting is one of the techniques I want to learn for the 25 Motif Challenge. It's good to hear that it's easier than it looks! Thanks for sharing.

This is really neat. Well done! Maybe I'll give block tatting another try .......