well because I am cutting onions of course LOL it happened to me a bit ago and my eyes aer still watery and stingy. I feel the need to cry for real though but it wont come out lol

It has been a week and I am so looking forward to the weekend.

Sunday night hubby had me up ALL night because his teeth hurt, I have told him for months to get his butt to the dentist but noooooooo why on earth would a husband ever listen to his wife?? This all came too on a rough day, I picked the kids up at my moms and went and did some grocery shopping Nate was good at first then the little demon child came out, so much I had to discipline him in the store and I got funny looks from an elderly lady, I did not smack my child that is saved for closed doors ;) lol but I told him he was in trouble and that was the last time... all you moms know what I am talking about. He still kept at it I had to drag him around the store while he put on his fake tears etc... it was not fun...

So Monday came I was a complete mess and so darn tired I wanted to scream, I was a mess because I ran out of my nut pills (anti anxiety meds (go ahead and judge me, whatever we all have our troubles)) and havent had any for about 3 days so I was all frazzled hubby was complaining and telling me how scared he was to go to the dentist etc... I made him his appointment and he went I wish we could have gotten in earlier because David was driving me CRAZY to the point where I was ready to pull his teeth, but I do understand I had 2 teeth pulled at the same time a couple years ago. So he got them pulled and your mouth does get sore he is having trouble chewing but my goodness I gave birth 2 times and the one I didnt have ANYTHING for pain and with my son (the one with no pain meds) I had my tubal done so there was double the pain I didnt complain as much... So yea he has been making me crazy lol

Yesterday my son had an appointment so I had to take Dave to work, I bet you I wasnt home for more than a half hour at a time. UGH!! Talk about exhausting, around 4pm is when I finally got to be home for good. i have been tatting some but I am just too lazy and busy at the moment to scan and tell.

I got a huge and by huge I am NOT exaggerating HUGE pot of soup cooking... I really really REALLY wish my mother would not have handed me the trait of cooking too much, I could feed a small army most times, so could my mom, hubby was being a smarty pants one day and told me to pretend I am only cooking for myself then maybe we wouldnt have so much left over. He thought it was funny but i didnt. 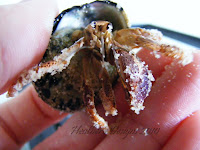 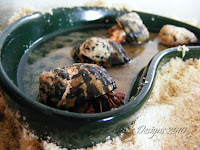 And we managed to adopt 6 crustacians so far, I am thinking a few more may wander onto our premisise from my daughter bringing them from school. Here is the story when I was in high school for some reason I fell in love with hermit crabs as pets and after my son was born the last living one I had passed away so I decided to not get anymore I wouldnt have time for them seen as how I had a new born and a 13 month old to chase after. The kids have been wanting them because I talk about the ones I used to have and I figured for Easter from David and I we would get them some, i bought 4 I named them Hermie, Squirmie, Pinchy, Inchy as a joke and well the kids loved it lol
Any whoo my daughter is studying animals and stuff in science class and they have fiddler crabs, which are different than hermit crabs so I decided to let her adopt a couple and then I realized they need 2 different living enviroments so yesterday when I was running I bought another small aquarium and a few decor and sand etc... and they they spotted them somehow I ended up being conned into adopting 2 fiddlers plus how many ever shannan will be bringing home from school... The fiddlers creep me out a little because they remind me of BIG spiders I refuse to pick those up lol 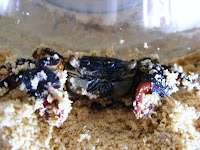 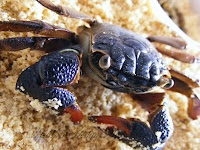 And Pinchy
Pinchy is my favorite he pays attention to me plus he isnt mean Fiddly broke off one of his legs and fiddly is smaller here is Pincy posing for me. 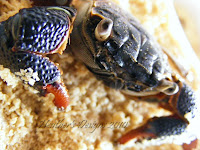 If you read this leave a comment and maybe just maybe a few of you may get something, hmmmm guess its like a give away for listening to me ramble and checking out my new pets lol
No warning on when this will end, its when I decide it will and maybe Pinchy will draw the winner(s) with his big claws. ;)
thoughtfully written by Heather at 1:53 PM

Sounds like you need a spa day, lol! I know what you mean about the cooking too. I am having trouble cooking for just my hubby and myself. I am going through a "try new recipes" phase and none of them are small!

Oh, I would comment even WITHOUT a tantalizing tease of a surprise goodie. Crabs...well, don't tell The Sprout because he will want to come right over! LOL!

The word verification for this comment came up "kingulgh" so it must be a crabby name in some language, maybe Irish?

You're a brave woman. I wouldn't have those beasties in my house, let alone take care of them. Too many legs, you know!

I had that same issue last night cooking Shepard's pie! Normally I don't have a problem with onions, but I've noticed the older an onion is the more I tear up. The widdle crabbies look adorable...I've been wishing I could get a fish tank again, I used to spend hours watching them when I was younger.

I'm with you, sister. I feel your pain.

Lol, that's what blogs are for. Venting, rambling, lol let it out sistah!

LOL! A husbands pain is always far worse than any of ours! Ya, right!
I had a bunch of hermit crabs. Where did you get you get yours? If you need any shells for them to grow into let me know, I have some in all sizes.
I didn't know we could get fiddlers for pets.

Oh, I love fiddler crabs!! I had a few as pets - both bracksish and fresh water species. The brackish ones were much harder to maintain! I loved watching them eat - so delicate! Never had hermit crabs though...

crabs are pets o.O wow. how big are they?

Pincy has a rather intelligent look, doesn't she!
Fox : ))

I can smell your soup. I wish I could cook.

I had a hermit crab when I was a youngen, can't remember his name, but I sure did like having him around