Have you ever seen such a sad sight??? 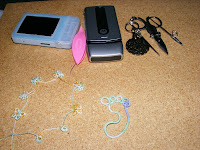 Allright I will start off with the not so sad sights. I had some thread left on a shuttle and made one of my feet, not my actual foot but my tatted foot pattern ;) the pattern is HERE

The other was just messing around with some ends I had as well. It gave me inspiration for my next design, which brings me to the sad sight... 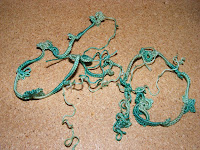 I was working on this for a few days in between doing things. I had finished it last night well finished this part anyways I also had to take apart 2 of the chains because I skipped a ring, it was to be celtic style so I wove the areas that needed woven joined it and went to flatted it out a bit so I can do round 2 WELL it wasnt behaving it kept twisting where it wasnt supposed to, I messed wit it for about 20 minutes then I had it, I think the stress I am currently under combined with being tired and aggrivated I just grabbed each end and RIPPED IT APART and threw it on the floor. Once I realized what I had done I figured it was time for bed it was after all 11:30pm. So after about 4 hours of sleep and getting my very cranky kids off to school, I decided to re-evaluate my pattern, I made a few changes and am now working on it AGAIN this time if I get frustrated I WILL NOT rip it apart or atleast try not to the darn red head in me has a temper LOL
thoughtfully written by Heather at 10:12 AM